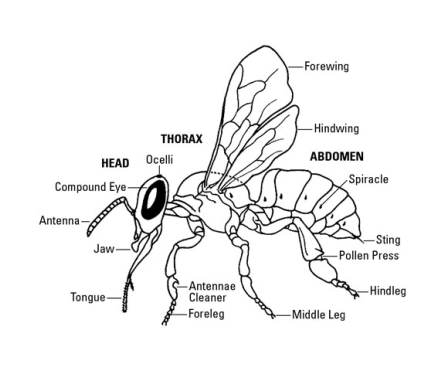 Honey bees are sophisticated and wonderful creatures that exist in our surroundings. These flying insects are found on every continent in the earth except for Antarctica. Though being very small in size, these creatures are perfectly adapted to their environment.

All kinds of bees live on the nectar and pollen. As it is estimated that 1/3rd of the human food supply depends on the insects' pollination, honey bees play the most vital role in this process. Without these little creatures, pollination becomes extremely difficult and time-consuming too.

All of us can describe or draw a basic bee with black & yellow stripes, wings, and 3-body parts. But in actuality, the anatomy of the bee has spectacular efficiency. To survive, thrive, and perform their work effectively in this world, honey bees have evolved with this captivating anatomy and explicit adaptations. While studying about the honey bee anatomy, one can find that every element has a well- defined purpose. Let's now understand more about the beautiful makeup of the honeybee.

The head features antennae, eyes, mandibles, and a tiny brain. Thorax makes the base for the legs and wings, whereas the abdomen comprises wax glands, reproductive organs, and the stinger. These three major sections together form the honeybee's external skeleton, known as an exoskeleton. These little creatures' external body is largely covered by a layer of hair assisting them in gathering the pollen and regulating their body temperature.

Though we all are generally aware of the bees' external anatomy, the bees' internal structure is much complex to understand. 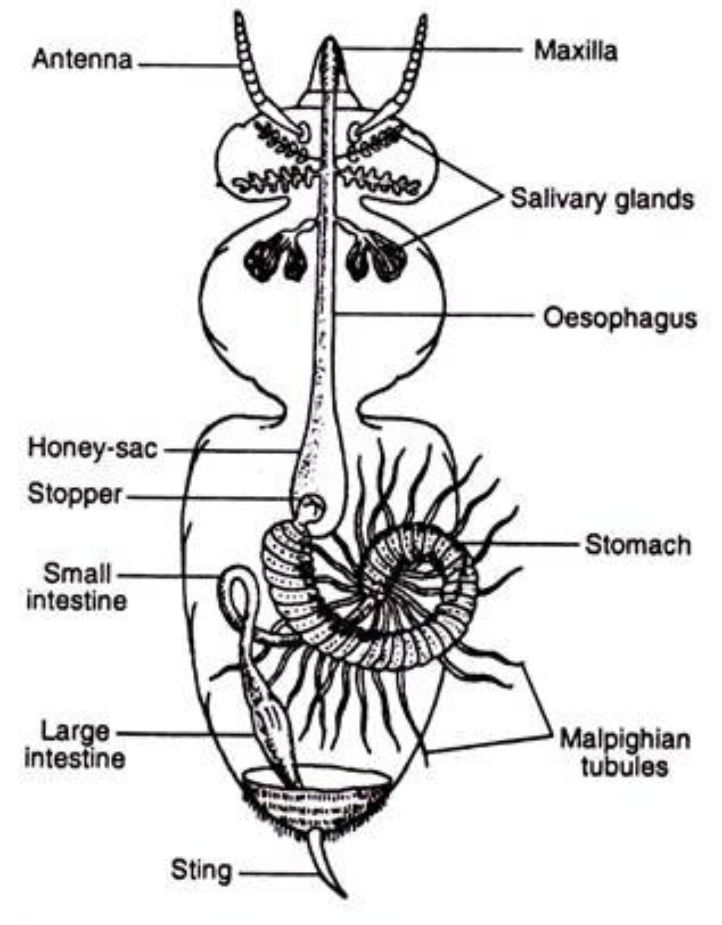 The mouth is the most important part of the honeybees' digestive system. Shaped in a tubular form, it is situated in the front portion of the head. The labrum and upper lip cover their jaws, and different bees have different mandible parts. Only the worker bees have narrower jaws in the central part than in the base. The spoon-shaped jaws are used to collect pollen from the flowers and are also used to soften and shape wax sheets with saliva. These jaws build cells and honeycombs and help in removing foreign elements from the hives.

Bees have a long, hairy, and grooved tongue and use a specialized structure, the proboscis, while taking liquid foods. Bees introduce the proboscis in the liquid by extending it and absorb the liquid by doing forward and backward movements.

Food enters the digestive tract through the mouth and goes down the esophagus and into the crop. The esophagus is basically a cylinder that runs from the mouth in the head, through the chest, and into the mid-region crop. The crop, or honey stomach as it is called now and again by beekeepers, is a circularly formed organ in the abdomen that fills in as a site for food stockpiling, as a capacity place for nectar honey bees gather from blossoms and fly back to the hive, or as an underlying site for the processing of food in the honey bee. The crop can grow essentially when it is full of honey or nectar, to such an extent that the abdomen swells. A valve called the Proventriculus is located at the end of the crop, which crushes food particles (such as pollen) and sifts pollen out of the stomach contents. Food goes through the Proventricular valve and into the bee’s Ventriculus.

The spiracles are outside gaps that are utilized for ventilation. Both in hatchlings and adults, there are 10 sets and every one of them except the second — which is exceptionally little—has shutting valves.

The valve of the primary spiracle doesn't close totally; honey bees cure this with hairs. This vermin enters particularly in new conceived or youthful honey bees, crossing the hair obstruction — that in these honey bees isn't solidified—. The causative operator of septicemia likewise enters through this spiracle.

Tracheas are conduits that discuss spiracles with the air sacs. This is the place where Acarapis Woodi prevails. This parasite benefits from hemolymph and acquires it by puncturing the windpipe. This causes cycles of melanization on it.

The principle tracheas reach out to the sides of the body and structure huge widening on the midsection sides. Honey bees need lungs like well-evolved creatures; oxygen is legitimately conveyed to all pieces of the body by a progression of cylinders called windpipes.

Honey bees' breathing is practically reverse to that of other vertebrates. Rather than coordinating the blood towards the air — that is, towards the lungs — air is shipped towards the blood. Honey bees have yellow colored blood.

Air sacs (or tracheal sacs) are established by a tracheal broadening and are sporadically conveyed by the body. They breakdown due to the weight and assume a fundamental function in tracheal ventilation. 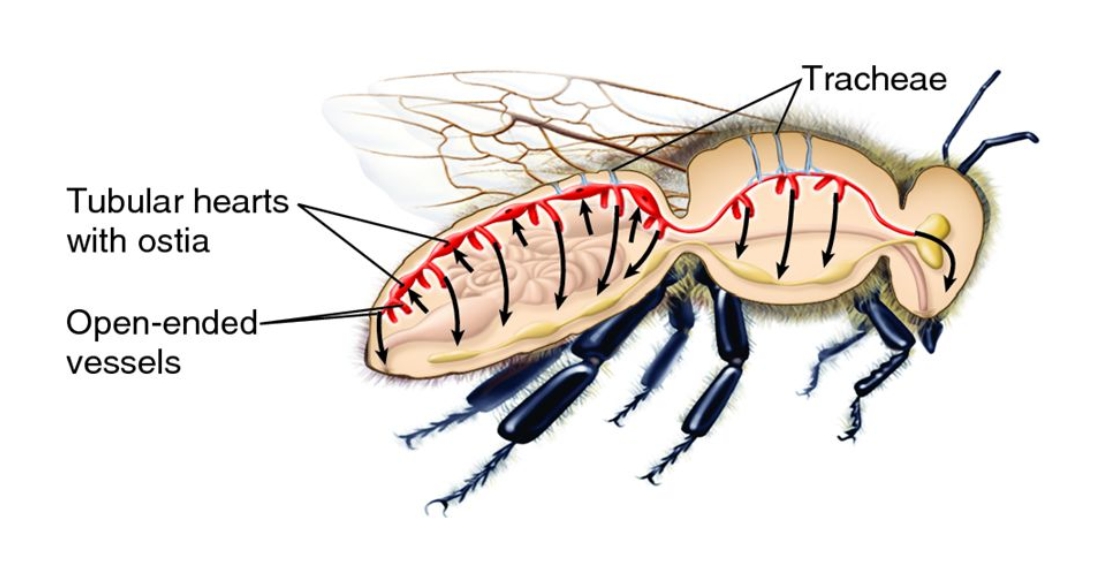 The circulatory arrangement of bumblebees is made out of a long cylinder that runs all through their body. It is shut at the stomach end and opened in the head. It extends along the digestive tract.

The hemolymph is a compound fluid that contains cells called lymphocytes. These cells have a phagocytic limit, do their own developments, and flow openly through the body each time the heart drives it to themind.

The heart of bees is shaped by ventricles combined by valves called Ostia. Ostiolar chambers are joined by valves that open just forward; this permits hemolymph progression, yet not its force. The dorsal and ventral diaphragms are accountable for circulation in the abdomen and help the blood to get back from the chest. Antennae vesicles drive blood to the antennae. 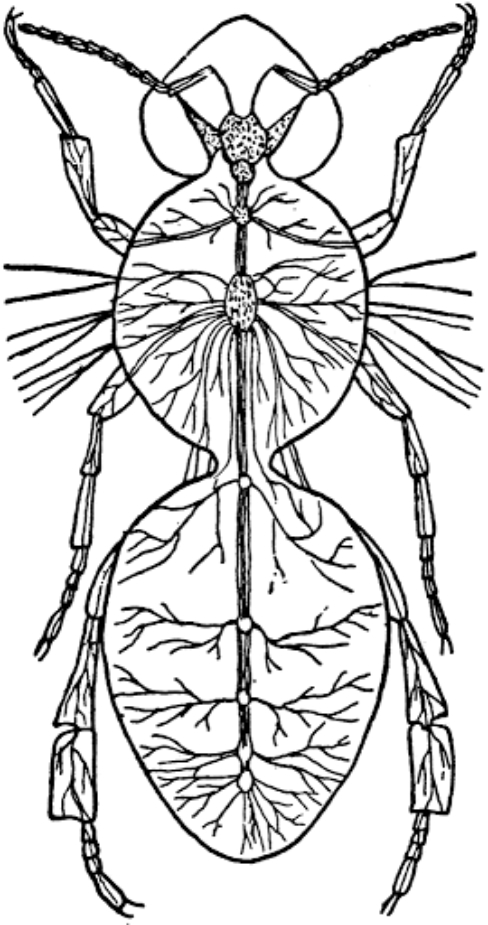 Thorax has two thoracic ganglia. The nerves that originate from the first of them are coordinated to the main pair of legs. The subsequent ganglion nerves are coordinated towards the flight muscles and the second and third combines of legs.

In the midsection, five other ganglia control digestion tracts and breathing organs capacities. The last two, fairly bigger than the others, control the reproductive organs and the stinger. As an outcome of this sensory system conveyance, every one of the three pieces of honey bee’s body (head, chest, and mid- region) works pretty much autonomously. This can be well understood by cutting the head of the bees. We will see that the remainder of the body can keep moving, starting with one section, then onto the next, moving the wings and proceed with their fundamental capacities for quite a while, yet hopelessly passing on at long last. Working drones' cerebrum is a lot bigger than that of the automatons disregarding being the top of the last ones more noteworthy.

It is shaped by the malpyghian tubules, eliminating waste substances from blood and empties them into the front digestive system to kill them with defecation. These substances are predominantly nitrogen subordinates. It is the objective of Malpighamoeba mellificae.

Ovaries end in discrete oviducts, which participate in a typical conductor or center oviduct. At its base, it speaks with the spermatheca, which is the place the spermatozoa of copulas are aggregated until their utilization.

This framework proceeds with the vagina, which closes at the vaginal opening, ensured by an overlap. At that stature, there are two sidelong packs and the bursa copulatrix.

Drones' reproductive system is comprised of two testicles, two vasa deferentia, two original vesicles, two bodily fluid organs, an ejaculatory channel, and a copulatory organ. Testicles form the testicular cylinders inside which spermatozoa are created. As the drones develop, testicles lose size until they get diminished to 1/3 of their unique size(pre-birth).

The original vesicles produce emissions that go with spermatozoa, and inside them, they complete the process of developing. Mucous glands speak with the original vesicles and the ejaculatory channel. They produce a substance that hardens in contact with air and water, however not with fundamental discharges.

The ejaculatory conduit communicates the bodily fluid organs with the copulatory organ. When it gets evaginated, it is presented in the sovereign's bursa copulatrix, and it is disengaged from the drone once semen is presented, working as a stopper.

Drones' muscular strength is created. This is significant from the physiological perspective so that at the point of intercourse, the endophallus eversion can be delivered rapidly.

An organ is a specific natural development or a lot of cells separated from the epithelial tissue. Organs are responsible for expounding, emitting, and discharging certain substances that solely mediate in certain physiological cycles.

These spherical-shaped glands are located in the head of the worker bees. In queen bees, they are simple, and in drones, they don't exist. Its emitting cells are assembled in bunches and pour their discharge in the lower part of the larynx through a focal pipe. Here is the Sacbrood Virus.

Their emission's item fills in as nourishment for hatchlings in their initial three days of everyday routine and for queens all through their life. When honey bees develop, these glands lose their usefulness, their volume diminishes, and they begin creating the invertase, important to cause the cleavage of nectar sugars.

These glands are available in the head and thorax. The two regular conduits pour spit saliva on the two sides of the tongue. Salivation weakens nectar and break down sugar gems. It contains proteins that are answerable for the change of nectar and honeydew in nectar. Intense loss of motion infections is situated in the thoracic organs.

These glands are placed on the head of the worker bees and queens. In working bees, it creates a small amount of the regal jam and in queens delivers a pheromone that assumes a significant part in the province's social attachment.

The Nassanov organ is odoriferous, situated in the dorsal aspect of the midsection, in the seventh abdominal tergite's foremost substance. This organ is possibly observed when honey bees expand their midsection and adjust the "call" position with the abdomen upwards and beating their wings. At that point, it radiates a trademark smell that distinguishes and pulls in to all the honey bees of a similar province that can be bewildered.

In the anterior part of the sternites of fragments, four to seven are found the wax organs — four sets, one for each section—. In each sternite, there are two light-shaded territories called "wax reflects" that convey pores where the oily emission of the wax organs, situated in each sternite's internal aspect, comes out.

Honey bees convey the scales or plates of wax to their mouth with the second pair of legs. At that point, they utilize their jaws to work and shape them to form the brushes later. The scales have an unpredictable pentagon shape and are little, each weighing 0.0008 g (approx 0.00003 oz). A measure of around 1,250,000 drops is needed to create 1 kg of wax.

Just honey bees have wax organs. They start to work roughly on day 12 of their life and end on day 20 when they become foragers.

These glands are present both in the worker and the queen bees, yet queens have fundamentally bigger organs than the workers and produce more venom. Queens use this toxin during battles with other rival queens, which happens when the image (develop grown-up stage) rises, while fertilized queens infrequently use toxin. Worker honey bees first use their venom for defense against predators and intruders when they attain about 14 days. The protein substance of venom organs from the worker and queen bees falls after the principal seven day stretch of grown-up life. Queen bee toxin organs lose 90% and workers half of their protein. This protein misfortune goes before the ultra-structural changes in the morphology of the venom organ secretor cells.

Several internal & external anatomical features of honey bee can be studied. Knowing about honey bee life structures is valuable for beekeepers since it causes one to understand the fundamental system that helps honey bee, and at last state, the ecosystem and our life.