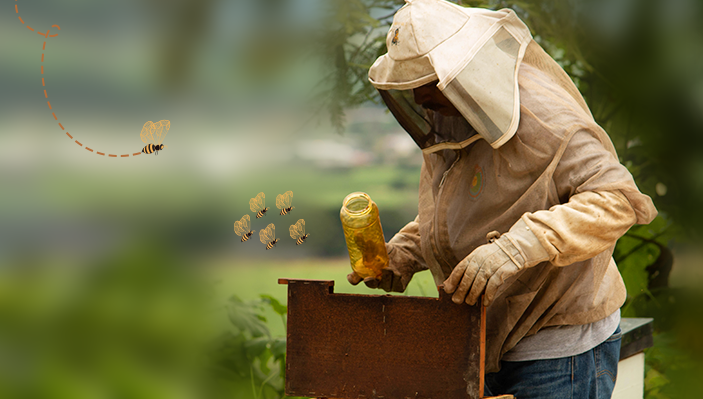 Framework bee farming as a way to get honey and wax was known in prehistoric times (according to the legend of the ancient Greeks, people acquainted with bee farming from Aristeas, king of Arcadia, son of Apollo). Information about bee farming can be found in many ancient books. Bee had particular importance in the ancient times, honey was used for healing purposes. Honey, as a beverage, is known since ancient times. Wax also had a variety of uses – for waxing boards, for writing, the Egyptians used it for embalming corpses. Asian nations – Japanese and Chinese also knew bee farming. At present, it is spread out all over the world, but it has special development in Italy and the United States.

In addition to the benefits of honey and beeswax, bee farming is very useful due to the cross-pollination of flowers.

The ratio of the number of worker bees to the number of drones is 3 to 1. The good queen lays in a big family 1200-2400 eggs per day. It is better to buy the second swarm, like the first, for the most part, has the old queen, which may be less fertile. When you have a few eggs, replace the queen. Laying of eggs can serve as a good indicator of fertility uterus.

Do not rush with the beginning of the season: on the one hand, after opening of hives bees start to breed larvae, they have to fly out for food in the cold weather, dying in large numbers, on the other hand – with the start of brood-rearing bees are more in motion, and therefore eat more food and often fall ill with diarrhea. The opening is made on clear, warm and windless days, around noon. After two days, the hive is carefully inspected and cleaned of litter and dead bees. According to the overflights, we can see whether the family suffered from damp or hunger. In the first case – a wet or damp hive is replaced with a dry one, in the second case – the bees are fed, inserting a frame of honey into the hive. Weak or orphaned (i.e. lost their queens) family is combined with strong or artificially increased. The compound of families is made by putting bees from a weak hive on the flight board of strong one, or mixing the two families and pouring with a scoop on the flight board, pre-spray the bees with a mixture of water and peppermint essential oil.

Strengthening of families is made by putting honeycombs with eggs no older than 3 days, or with special care. The first case is valid only when the hive lost the uterus, and the available brood is too big, so bees cannot raise the queen. The second method is used, when the hive is weak because of slow egg-laying or the slow development of larvae, you need to maintain sufficient heat and ventilation in the hive and to feed them.

Feeding has a great benefit – especially in the spring when there is little harvest (feed at night to avoid theft). The feed is a mixture of flour and water (wheat, rye, oat or pea) or pure honey, diluted with hot water (It is necessary to boil sour honey and then remove a foam). Also, give to bee’s saltwater (a teaspoon of salt and a bottle of water) or clean. However, the most efficient technique of feeding is spare cells. Feeding starts when the hives winter, you can also start it after opening, when there is no frost, with a gradual increase in portions, until the appearance of harvest, and then the amount of feed is gradually reduced. Make summer feeding in the drought, cloudy or rainy weather. Sometimes you need to feed bees in the fall – in those bad years when the bees are unable to collect enough food for the winter. Feeding begins in August in large portions, because gradually increasing portions may result in delayed egg-laying.

With the beginning of warm-season, you should start the equation of forces in the apiary. There are two ways: the first is to put a frame with larvae without adult bees from the strong hive into the weak, the second method – move the weak hive at the place of a strong one in the noon, when flying bees are in a field. If feeding and the equation are made on time and efficiently, then in May or June, depending on climate, swarming begins. You can notice the preparing the hive to swarm by laying drone brood and making queen cells (with adult larvae or sealed). Swarm goes out between 8 am and 2 pm. Bees destroy unnecessary drone larvae after releasing of the swarm. If a bee colony is weak, or if you do not want to increase the number of hives, then take action against the swarming (there are a lot of beekeepers who find it possible and even necessary to use only artificial swarming). If swarming occurs during a good harvest when there are not enough cells (there is a lot of food and the queen lays a lot of eggs (fertility of queen increases in the good harvest). The only way is to remove the distress, which is caused by purely meteorological conditions, the area of the comb should be sufficient so that the queen can lay all the eggs. If swarming still being prepared, it is necessary to replace the honeycombs with food or larvae to real empty and artificial honeycombs. Empty cells, eliminating the very reason of swarming, keep bees in the hive. Then, you should prevent excessive breeding of drones, and put the hive in a shady place. Dadan, and after – Bertrand and Cowan [the first is American beekeeper, a follower of Langstroth, called the “Father of American Beekeeping”, the second – the editor of “Revue InternationalApiculture” (Nyon, Switzerland ), the third – editor of “British Bee Journal”), applying the above methods, reduced the number of natural swarms to 2-3% or less. Sometimes, it may help to put the queen in a wire cage, as well as cutting of queen cells. Preventive measures against the second outgoing swarm, besides the above-mentioned, consist of cutting off the queen cells, moving the old hive to a new location (shaded), and the new hive to the place of the old one. After swarming you should give the swarm the time to settle, sometimes people use special devices: the hanging black hat, a bunch of dried leaves, a piece of black woolen cloth or better an old dry dark honeycomb. Catch the swarm with the net and put it in an empty hive.

Collecting bees (with the queen) in the net, pour them out on the canvas in front of the wide-open empty hive. The new hive should be cool, with dry honeycombs and with the smell of herbs.

Natural swarming makes the beekeeper increase the number of hives sometimes even beyond the desired standards and increased swarming, weakening bees and interrupting their work, reduces the collection of honey, and it is regardless of the will of man, often causing trouble or because it is settled in the wrong place or wrong time, and the loss of time to guard swarm and to search flown away swarms families, which do not have enough force, swarm, and the opposite – it happens that the family does not want to swarm, although the hive is excessively overflowing. So, be ready)

Beekeepers have long been trying to find the right method of artificial breeding of families. Currently, there are many ways of artificial swarming.

The first method is the following: a few days before the time of the swarming of the strong hive (A1 ) you sweep away all the bees in an empty hive (A2 ) and put one or two cells with the larvae and the food, then put this hive (A 2 ) in the place of the first hive (A 1 ), but the latter in the place of a strong second hive (B), which is removed away, and after such a reversal the flying bees of a hive (B), returning from the field, fly into the hive (A 1 ) and work there. The second method differs from the first: put in the hive (A 2 ), after it is stood in the place of the hive (A 1 ), only one queen (without bees), if possible – on the same cell, where it was found, the hive (A 1 ) can be replaced to a completely new location or to the place of any strong hive (B) with a young queen, where it is necessary to prevent swarming, in this case (A 1 ) is put to a new location. If the hive is rich in young bees, whose duty is mainly the care for kids, you can put these young bees with the queen to a new hive, but leaving the greater part in the old hive. If you want to take another swarm from this old hive, then, without waiting for the breeding of a new queen, you must give them a spare young fetal queen, and then after 10-15 days, you can re-produce artificial swarming. The third method involves the formation of the nucleus (the word was used by Langstroth to call small families, breeding exclusively for queens). Take a few frames with ready larvae and a fertile queen from the strong hive, insert into the new hive, and put this new hive in the place of a strong hive, which is carried away. Flying bees (it is better to make this operation in a period of good harvest), returning from the field, fill all these empty honeycombs. The bees without the queen in the old hive will lay the queen cells, you can transfer these cells in the latter stage of the development of the queens to those hives where you want to remove the queen to make a new swarm. Then you can take two frames from each strong family, cleave queen cells, and put them in the place of the strongest hive at the time of the harvest.

If the old queen begins to lay fewer eggs or the young one is not fertilized, it is necessary to replace them to spare queen. If there is any doubt that a new swarm has enough time to recover until the fall, it is better to combine it with the old family.

You should remember the age of a queen: usually on the 3rd or 4th year the queen begins to grow old, it is better to replace it to a young one. A new queen is needed when the old queen is killed in the period when the hive has no eggs or larvae younger than 3 days, i.e. when the bees are no longer able to lay the new queen cells. You can put in this hive: 1) combs with eggs or larvae (not older than 3 days), borrowing them from the strongest hive, or 2) queen cells from the hive, where they are in excess. Some beekeepers have a nucleus. Take 2-3 frames with young bees, without a queen from each strong hive, and put them into the hive, the interior of which is pre-reduced.

In 24 hours the bees understand their loneliness, so you can give them queen cells, closed with a lid. When released queen begins to lay eggs, you can put this queen in the orphaned hive, make a new swarm or sell. Bees will breed a new queen from these eggs, and so on. When you put the queen in a hive, there is no danger usually, but in case of a hostile attitude to the queen, you can put it in specific cells or pre-spray the bees with a mixture of water and peppermint essential oil.